You’re doing it already… You just don’t know it.  Or maybe you do but don’t quite appreciate how often you are making a beneficial food choice for yourself.  Here are 4 sneaky ways veganism is actually a part of your eating routine.

While some see the choice of being vegan as a dietary fad, or even a craze, veganism is practiced widely around the world and in almost all cultures.

While some make the choice of veganism out of conscience, some do it for health reasons, religious reasons, cultural influences, or economic conditions, there is almost no one who doesn’t partake of a vegan diet in one way or another.

Among those who enjoy an omnivorous diet, rich in meats and animal products, there are people who have a knee-jerk reaction to the idea of a purely plant-based dinner plate.  There are intuitive and instinctive objections that a diet devoid of meat is less healthy, less hearty, less enjoyable, and just plain unnatural.

We aren’t rabbits, after all.  We are the descendants of hunter-gatherers.  We tamed fire principally for the purpose of roasting meat from animals to make it easier and safer to consume.  The fossil record is rich with the artifacts of spear tips and arrowheads, used to bring down big game, and flint and obsidian knives used to skin and breakdown our catches.  Rafts and boats were developed to chase fish as well as expand our trade.  King’s feasts are recorded to be meat-rich extravaganzas to celebrate victories and marriages.  Native Americans survived on dried pemmican through hard winters when not a green leaf of any kind could be found.

The arguments against a return to a diet solely based on plants are numerous, but many have long ago been dismissed by scientific research.

That last one brings me to the point of this article.  As a chef I work everyday to find ways to bring out the color, aroma, and flavor of all foods.  I cook with meat, vegetables, fruits and fungi.

I don’t have an aversion to meat except that I believe it occupies way too much of our culinary diet.  There is also a cultural bias that a meal without meat is somehow lacking or unfulfilling.

I eat meat aplenty.  I eat pescatarian.  I eat a vegetarian diet often.  And I eat a vegan diet more often that I consciously intend to.

And you probably do, too.

Vegan foods are not just tubs of iceberg lettuce with some unseasoned tomatoes thrown in.  A great deal of food products are made with only plant-based ingredients.  You don’t have to be a vegan to enjoy these foods, either.  Chances are, you are already eating them.

Pastas:  Before you add ground beef to marinara, you’ve got a vegan alternative. Most pasta, both traditional recipes and boxed, are vegan.  They contain semolina flour, salt, and water.  The gluten binding holds the flour together once the water is added.  Some pastas are made with eggs, but around the world preparing pasta from flour is the norm.

And there’s no debate that pasta is both hearty and filling.  And there are more varieties of pasta commonly available than ever before.  Whole wheat, gluten-free, and pasta flavored with other vegan ingredients like cracked black pepper, spinach, or sun dried tomato are easy to prepare and delicious to consume, even with the ground beef or grilled chicken left off.  Worried you’ll miss the meat?  Try adding grilled eggplant, or Martha Stewart’s Lentil, Rice and Portabella Meatballs for a savory change that’s good for you and satisfying too.

Nothing beats easy home-made pasta.  Check out this quick recipe from Veganosity and think about how you would compliment this staple starch with garlic-basil tomato sauce and a pan full of roasted vegetables!

Eating Out:  Think your local takeaway only has greasy burgers and fried chicken?  Think again.  Many fast food restaurants have “unintentionally vegan” food.

Snacks:  They’re sweet, they’re sugary, they’re plant-based.  A great deal of our most famous snacks are surprisingly meat-free.  Surprisingly only because we never even really stopped to think about it.  While veganism is often associated with healthy eating, let’s be clear:  You can eat vegan and eat bad.  You can eat meat and eat bad.  But not every vegan choice has to be bad, you’ve just been eating vegan without being aware of it, most likely.

Adult Beverages:  Yep, when you toss back a cool beer or sip on a barrel aged whiskey or blend up a margarita, you’re going vegan.  Alcohol is exclusively derived from plant sugars and unless your beer includes some animal-based additives such as egg stabilizers, you and your wheat grass-juicing buddy have some common ground to meet on.

While beers do go great with grilled meats and spicy wings, they are also a tasty compliment to chips and dips (vegan) and mustard smeared over soft-dough pretzels (vegan).  And no one would think of inserting a spiced chicken satay into a perfectly dry martini.  Load up the fruits in a daiquiri or the vegetables in a Bloody Mary, and you’ll get a lot of kick for your vegan content.  Check out my version of The Dogwood, a great spring sipping cocktail – guaranteed to be vegan!

If your are a wine lover, then its a question of process over ingredients.  Wine in and of itself is fermented grapes, but the “finning” process used to clarify the crushed, musty juice often contains animal by-products such as gelatin, casein, and egg whites.  Regardless, if you’ve been tipping a chardonnay, even over a platter of prosciutto and smoked salmon, you’ve gone a little bit vegan.

So don’t panic the next time you are presented with a salad full of leafy greens and colorful vegetables.  Eating vegan is much easier than your reflexive meat-eating instinct says it is.  You’ve already been doing it, after all.

This site uses Akismet to reduce spam. Learn how your comment data is processed.

Personal and professional catering chef, offering a range of services including cooking, catering, and classes

Stay up-to-date with everything Chef Jack is doing, including events and new recipes!

There are no upcoming events.

Subscribe and get Chef Jack’s 1-Minute Boil – A weekly collection of free tips and hacks to make you a better chef! 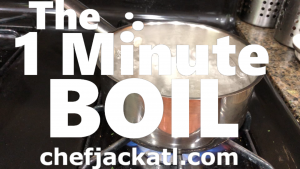 BONUS – Sign up for The 1-Minute Boil and you’ll also receive our weekly newsletter updating you on articles, videos, and events on Chef Jack ATL